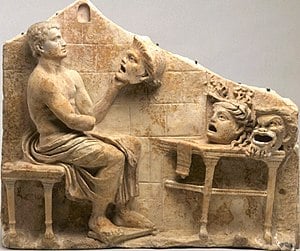 A while back I had the pleasure of attending an art exhibition held here in Canberra entitled ‘Ancient Greeks: athletes, warriors and heroes’.

The title was partially deceptive, in that a lot of the exhibition – by proxy of the artifacts – exhibited the craft traditions of the ancients, too. Poetry, music and dance we clearly featured.  Moreover there was a coherence present in the artifacts as a whole. A snapshot of a civilization where there was clear and coherent interface and interaction between athletics, crafts, philosophy, mysticism, music, dance, poetry and acting.

A culture where people of these persuasions knew each other and interacted regularly.  It was known: these are all facets of human civilization with merit.

One statue that particularly drew my attention was beautiful column of the Muses. The Muses are [*cough* *cough*] 9 in number.  And, though I have seen their spheres of influence translated differently, their domains [as fields of inquiry and inspiration] would make an extremely interesting base for an educational system [even in this age]. A pity, we no longer value these so highly.

Next to the muses was a bust of Aristophanes [Ἀριστοφάνης] – the great poet and playwright. By the birds, his work appeared to me [manner syncronistika maximus], not so long ago.  His play ‘the Clouds’ is even singled out by Plato as involved in leading to the trial of Socrates*.

Reading the synopsis of Aristophane’s play ‘the Clouds’ was a time recently that I had a fit of full body laughter [not a domesticated chortle].

For people who don’t know, the basic plot outline [*spoilers ahead*]:

Revolves around Strepsiades, a father trying to clear debts incurred by his sons gambling habit.
He wakes with the epiphany that if he – or moreover, his son – can learn to argue well in court, he will be cleared of his debt via powers of argumentation alone.

He tries to persuade his son to join ‘The Thinkery’ [‘a school for wastrels and bums that no self-respecting, athletic young man dares to be associated with’**].
His son refuses.
So he decides to enroll himself.
The headmaster of the school is none other than Socrates himself.!

After initial enthusiasm, Socrates quickly becomes infuriated with his matured aged students’ inability to grasp the lessons.
He proscribes a laying incubatory-style praxis to help inculcated the capacity for higher thought.

His son is finally convinced to enroll and undergoes an inauspicious transformation from athletic youth to cold and calculating nerd. The plan backfires as the son begins to argue with the father, instead of helping him argue his way to a clean slate. Strepsiades is enraged and chases awaym with pitchfork and torch, the students of the Thinkery.
It is art.

It was written in ~400BC – and yet is so humorously contemporary.
I had been, just prior to having this play fall into my lap, performing the heinous duty of tracking how metamoderism is interfacing and interfering with the training of the physical body.

One could straight lift many of the plays themes into the physical work sphere: ‘Thinkery’ becomes ‘meta-thinkery’ or, more aptly, the ‘metathinkamovery’. The part in the play where Aristophanes lampoons the Thinkery’s latest inventions could easily translate into any humdrum movement or neuroneuro screening protocol; or fascinating with all things haptics, ‘movement philosophy’ or embodied cognition.

The play translates across some 2400 years because the disenchantment functions the same across time [i.e. is not a byproduct of modernity or the scientific revolution; though these are involved in how it manifests in this era].

Back to the body.

Few people in contemporary society can laugh fully or do so regularly.
Mirth is arrested.
Chortling, permissible.
Wry smile and mechanical haughty false laughter,
encouraged.
Full body laughter is offensive.
It is an affront to aspects of the undertow.
It has too much life.
Very often, too, it comes about from someone pointing out a taboo that the civilization-coding cannot handle.
You can mock edifices that are in stasis
but ‘a rolling stone gathers no moss’.
In part,  living [sub]cultures are resistant to mockery for this very reason.
Whereas the dead ones are sitting ducks.

The capacity of expressing laughter fully in the body is different than its capacity to move; its suppleness or flexibility.  Working on these can help free the laugh trapped in the flesh statue
but they are not the same qualities.
It goes the other way, too.
More interestingly so
in fact.

The act of allowing fuller and fuller mirth ‘wrung out’ some very interesting structures for me. Aspects of the tendon of diaphragm and renal fascia were *worked* in a way I have never experienced. Similarly the act of weeping fuller allowed me to work the structure of my ribcage and upper thoracic in ways even the deepest rotations and Human Crossbow stretch never did [and I am right up there in the top handfuls of people I have met in terms of my ability to use these postures to work the body].

Of course, there are atmospherics and other correlations to all this.

Most comedies aren’t.
Breaking through peoples dense patterning to allow true laughter to occur is a difficult thing to do.  To face our inability to laugh fully is to face the extent of our inhumanity.

We talk all about assessing peoples motions, movements and abilities – but does anyone take working with ’embodied mirth’ seriously [?!]

And it will be the topic of one of some upcoming notes articles, here on the site.  I found out a number of very cool and little known things about the body and mirth whilst in interplay with a number my colleagues. 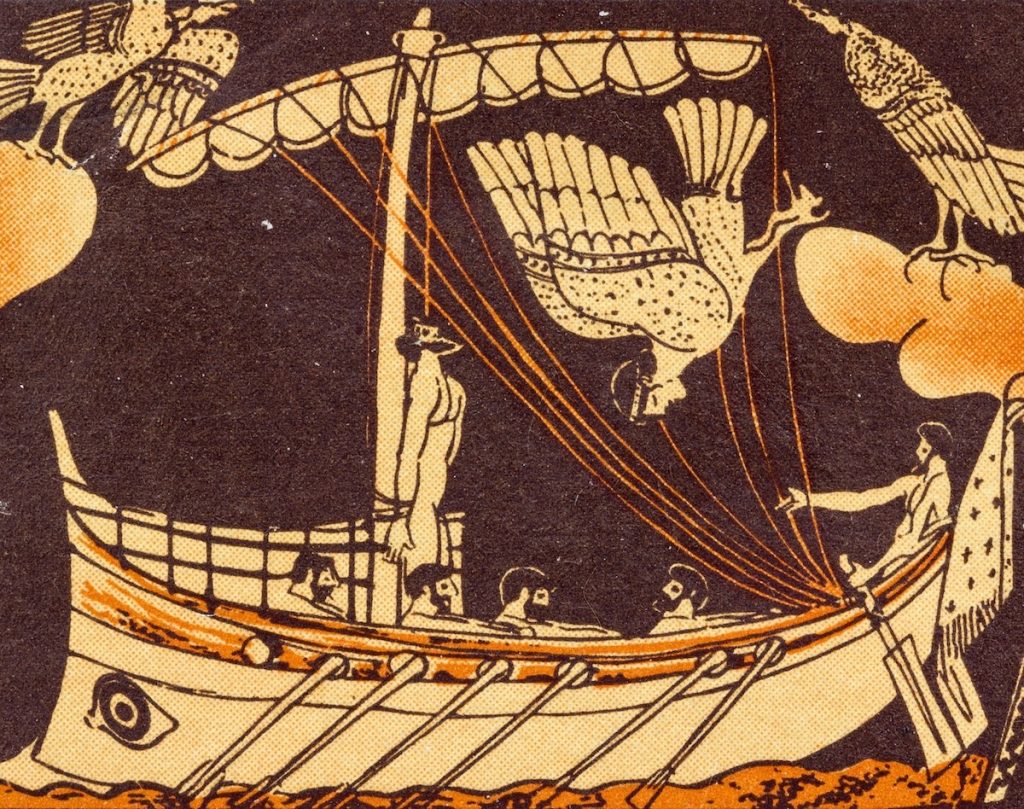 [*] terrestrial nostos
After terrestrial nostos [νόστος]* I find myself once again residing in my hometown of Canberra. The last quarter of 2021 seemed at times to contain diamond-forming pressure, but was also punctuated with some really nice human experiences with strangers – also under pressure – maintaining their humanity; everybody helping each other out.

As with many who teach physical based methods the last two years have dampened the in-person expression of our crafts somewhat. As I continue the Augean labour of unboxing, I am dusting off a lot of equipment that I have had in storage due to a decade of apartment living. Now in a house once more I am enjoying opening and playing around with stuff I had forgot I even had!

I have also decided I like the word ‘reenchantment’ too much to let it fall by the wayside; for it to be corrupted by misuse in the public forum. Thusly I shall convincingly and mercurially reclaim its use for my craft.

Digital teaching of my craft is proceeding most excellently, though the need to reestablish a physical alchemy laboratory [location and classes] is growing.  So the quest of when and where to situate classes is something fun to do this year.

Leafing through my old journals as I boxed them up,  there is *a lot* of material I am very much looking forward to playing around with again.  It is physical alchemy, afterall..
..and it has been too long since I have been able to teach it in its fullest expression.

Time and place, once again.

For there have been many inauspicious occurrences in the last quarter [and two years preceding it].  But besides the occasional sly suspicious squint, I am not going to focus on these. There is work to do.   And that is where I will direct my energies, for you see:

I’ve misplaced
my adolescent nihilism
I know not where
sensible agnosticism
gone.
Sitting on the my garden bench
facing East
under the Firmament
billiard ballin’
spectacles
shattered
on the earth.
Stargazing in awe
chalk me up  as one
on team
friendly Cosmos.

A lot can be done if one persists, auspiciously.  Take the  Physical Alchemy Facebook group for instance.   Started long ago,  because I hath strong habits against speaking and expressing anything in the public forum  and realized I would never get anywhere if I did not begin defying them.

Now at ~1600;  it contains well over 90% of the most interesting human beings I have had the pleasure of meeting in my life[!]; creators and practitioners from the major physical work spheres operational on planet Earth in this Age – and a large number of people who have within themselves seeds that would be an exceptional boon to the world if they too, persisted auspiciously.

Great to have you all there [though I wish we could play in the metametaverse – i.e reenchanted physical reality away from devices].

One of the difficulties I have in posting physical exercises [which I do little of, as you can see] is that I practice from an unknown paradigm.

It is evolves.
It mutates.
Modernism, post-modernism [and anti post-modernism] and metamodernism – for example – are all the same strain of disenchantment; mutating and competing with each other in a memetic [and sub-memetic] ecosystem.

There is talk of ‘paradigm shifts’** but these usually localizes around transitions such as biomedical –> biopsychosocial.  But this, when view from the reenchantment paradigm is but a shift within strain [a mutation].
Not something I would consider a paradigm shift such as the differences between the medieval and modern eras.

Etymologically ‘paradigm’ comes from the Greek – paradeiknunai  – meaning ‘to show side-by-side’. And something my students have known for a long while now, that I have only eluded to publicly, is that if you want to study what Physical Alchemy is you have to watch when my posts occur in relation to posts in all the other physical work spheres.

You have to view them side by side.

Many of the adjacent groups to this craft I practice are actually far, far better places for observing aspects of what I teach than the group I run, if you understand what I mean by side by side.

It does make teaching the practical, physical aspects of my craft somewhat difficult in the virtual space. What makes sound sense in the biopsychosocial model is many times contraindicated in the reenchantment paradigm – but for reasons that are difficult to describe unless one is already practicing within this paradigm and has the perceptions involved therein.

Difficult but not impossible, so I will keep trying.

Much later this year, and forming a triangle with restarting classes and finishing one of my tomes, is the idea of beginning an online ‘Round Table’*** podcast/video interview sort of thing.

Basically the idea is situated between the monotony of just one person talking and the clusterfuck of allowing anyone to talk about whatever they want [regardless of if they know or understand anything about it] I feel there exists a place where I can potentially select some of the people I know who are doing great work in specific realms and talk to them in a way that is ..different.

* ‘nostos’ is a Greek term connected to the Odyssey that means ‘homecoming’/’returning home via sea after long adventures’ but that carries with it an idea of spiritual homecoming.. perhaps even coming back to the beginning on a different level that when one left.

** I have been refraining from using the word ‘paradigm’ these last few years, as it has become highly disenchanted and a ‘tell’. Particularly if the person starts discoursing on ‘paradigm shifts in the Kuhnian sense’. Too vehement a proselytizing of biopsychosocial is ..’evidentiary’

*** See, now because I reside in the galatic central point of acronyms [Canberra] I can call it P.A.R.T – ‘Physical Alchemy Round Table’. It totally makes sense, bro.